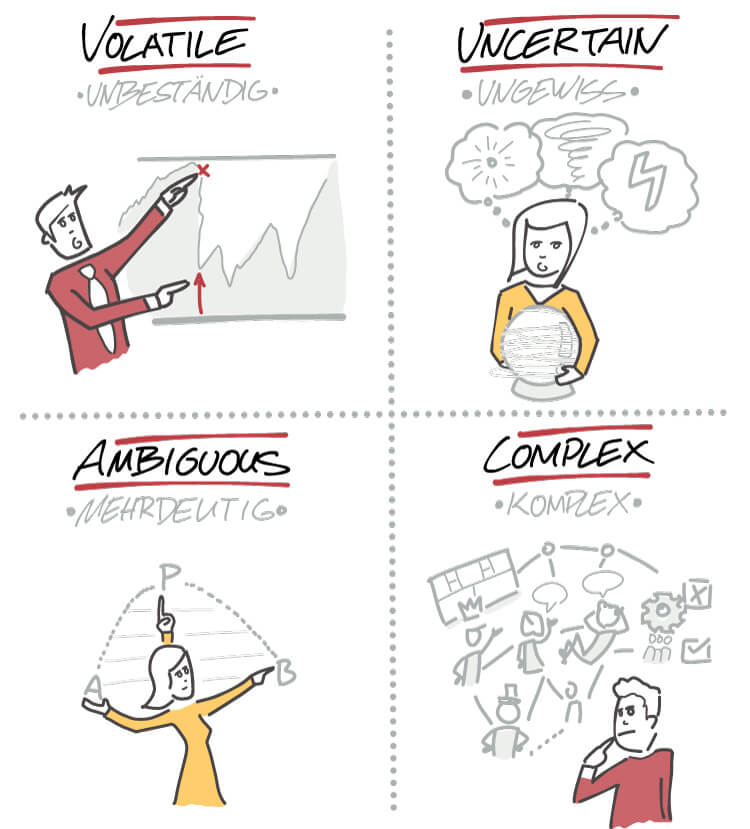 „If there is a spark of genius in the leadership function […] it must lie in the ability to assemble…a clearly articulated vision of the future that is at once simple, easily understood, clearly desirable, and energizing.“

Welcome to the Visual Selling® Summer Academy. From today going forward,  every Friday for the next 24 weeks you will be receiving a new contribution to a model or method for your business success. These will all be in the context of the VUCA framework. We will assist you in finding your own individual path toward becoming a successful market presence in the future.

What is the origin of VUCA and what is it exactly?

The term VUCA was first used in 1987 at the US Army War College in Carlisle, Pennsylvania.. (US Army Heritage and Education Center, 2018) When the Cold War was coming to an end and the Soviet Union along with its military apparatus and financial structure was gradually dissolving, the US military had to confront a major challenge. Events that followed led to a serious reassessment of defense needs and national defense costs for the American people and their government.

Suddenly, the future could not be foreseen and planned for. There was no longer one risk that was the main focus. The American military was therefore faced with the huge challenge of looking 10 to 20 years into the future in order to define existing risks to national security as well as to develop suitable strategies and fighting forces to deal with these risks and to minimize them. At the same time, strategic managers had to confront new challenges in order to be able to act during this period that was characterized by Volatility, Uncertainty, Complexity, and Ambiguity. (Mackey, 1992, pp. 1ff.)

VUCA in the business world

It was not only in the military, however, but in business settings as well that VUCA has taken on an increasingly important role. For example, prices and markets can suddenly change due to volatility (microTOOL GmbH). Companies need to keep asking themselves: ‘Who will our customers and competitors be tomorrow?’ (Konrad, 2016). Being able to respond quickly but also anticipating and implementing appropriate interventions are thus increasingly important. And also, there is huge pressure to innovate (Konrad, 2016).

This is often quite difficult since so much uncertainty prevails. Indeed, standard project management methods are being stretched to their limits. Market developments can be more and more difficult to estimate, and knowledge becomes increasingly ephemeral. As a result, employees are more and more forced to seek out further training and learn new skills (MicroTOOL GmbH; Conrad, 2016).

This increasing complexity makes doing business even more difficult. This complexity is the result of rapid changes in the surrounding environment, the number of occurring variables, correlations of these variables with each other, and general uncertainty about events and results. (Mackey, 1992, p 10ff.). For example, global action brings with it many risks and relationships that need to be taken into account. Cultural differences can have an effect on what happens, but legal differences can as well. Success for every single employee will mean being flexible and prepared over and over again to go outside one’s comfort zone (MicroTOOL GmbH; Conrad, 2016)

In the long run, information is more often than not ambiguous (MicroTOOL GmbH). This makes it difficult to focus one’s thinking. A number of perspectives and opinions need to be taken into account in order to be to do business in a consistent way. Konrad (2016) points out that, in addition, cause-effect relationships are no longer clear, and more and more parameters need to be considered when making decisions, but these might in fact be inaccurate. This will lead to individual solutions instead of previously known and established business models, according to Konrad (2016).

VUCA as a management issue

Thus VUCA is a management issue even for top management. If there is more responsibility connected with a job, then the level of complexity will also increase. This means that managers need to have a vision of the future and will be responsible for achieving company goals.

To do this, they need to act accordingly in order to determine and carry out necessary tasks, projects, and programs (Mackey, 1992, p. 4). They need to motivate their employees and lead them in the right direction. Managers can do this by acting as coaches, facilitators, developers, leaders, organizers, decision-makers, team-builders, and consultants, according to Lawrence and Steck (1991, p. 1).

Education and further training to learn about VUCA

In order to achieve the right results, a certain combination will be necessary. First, there is vision (more details in week 16 on September 6, 2019), then comes communication, and finally (technical) knowledge. Vision is the component that is least understood and the most difficult to quantify. But it is especially important, says Mackey (1992), since any movement without vision will be aimless and ineffective. (Mackey, 1992, pp. 4ff.)

Leaders must therefore to be able to solve abstract problems and make appropriate decisions. This is a learned skill and therefore it will vary widely. It depends on the acquired knowledge, skills, values, temperament, and cleverness of each individual. (Mackey, 1992, pp. 10ff.; Lawrence and Steck, 1991, p. 13)

Thus, management skills come to be developed or acquired over many years on the job, says Mackey (1992). According to him, this can be done in three ways: formal training, practical experience (on-the-job,) and individual development (self-study). This goes hand in hand with constant learning and increasing challenges. If responsibility increases, problems that will need to be overcome will grow larger, and solving them will lead to more experience. In order to do this, it will be necessary to expand one’s comfort zone constantly. (Mackey, 1992, pp. 11ff.)

“If there is a spark of genius in the leadership function . . . it must lie in the ability to assemble . . . a clearly articulated vision of the future that is at once simple, easily understood, clearly desirable, and energizing.”

All of this requires a transformation of the entire company. In this context, digitization using software applications can play a role in business. There are already numerous systems available that filter and process the amount of available information (big data) in order to generate usable data (smart data). Managers can also rely on computer technology to implement projects and to analyze problems and risks. Thus transformation will be indispensable in order to continue to operate successfully in the global market of the future.

What can you do specifically to utilize VUCA successfully? You will find that out next week when we talk about VUCA Prime.

In the past, have you experienced any challenges in the VUCA world? Give some examples. Are you currently working on a project influenced by VUCA? Would you like to offer this as a practical example for the Visual Selling® Summer Academy? If so, then please jot it down.